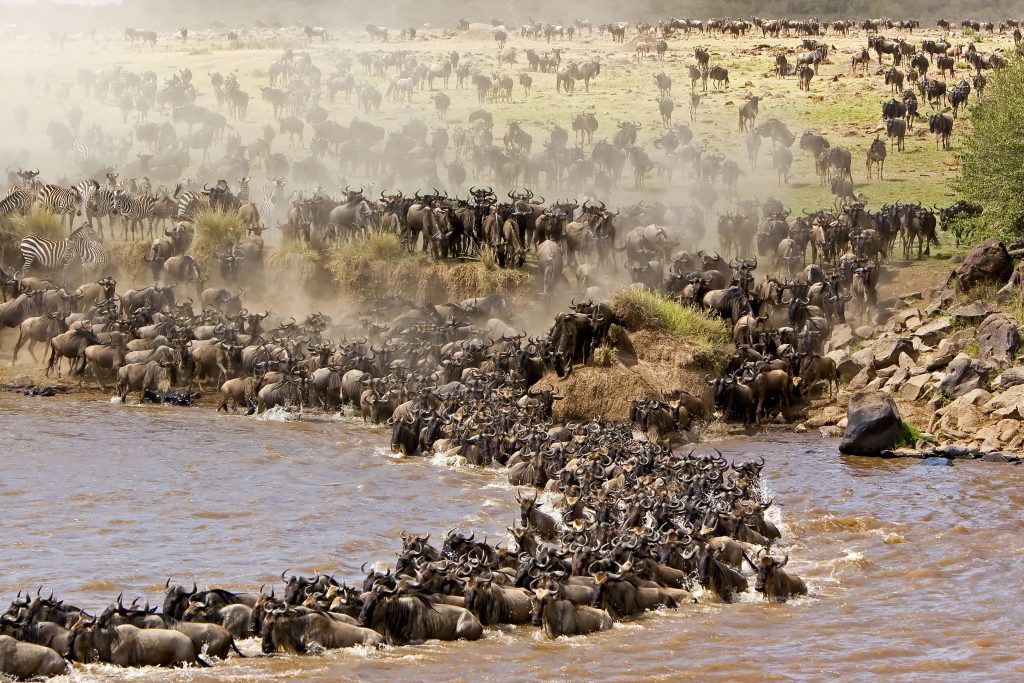 The Great Migration takes place in the Serengeti region, crossing the borders between Kenya and Tanzania. The legendary event is the largest in the world and sees wildebeest move from the southern Serengeti in Tanzania to the Masai Mara reserve in Kenya.

Immerse yourself in nature’s breathtaking spectacle, as hundreds of thousands of wildebeest and zebras move from the southern plains to the northern hills after the rainy season in spring with packs of lions and hyenas lurking, waiting to prey on any weak or young victims!

Wildebeest migration is one of the most stunning events that you could ever wish to see. On top of this it’s not just wildebeest that you will be watching, expect to see all the diverse wildlife that Africa has to offer.

Whether you want your safari adventure to last three nights or three weeks, you are covered. We have an abundance of Wildebeest Migration Safaris for you to choose from that are situated in some of Africa’s prime wildlife spotting locations such as Kenya’s Masai Mara and Tanzania’s Serengeti. The enchanting wildebeest migration safaris in Tanzania that we offer, include a number of exciting activities, so be sure to us today to find out more!

Serengeti is an excellent park for game viewing. Every year in May or June, zebras and wildebeest Carpet the northern Serengeti, undertaking a circuit of 100km as they thunder westwards searching for new pastures, waterholes and young grass o the park corridor. Predators prowl the plains, and Serengeti is the only place where one can witness this annual Movement, also called “The race for life”.

This safari is tailor made to suite your needs as you may prefer. Get to the home of the world’s greatest concentrations of wildlife and the majority of the Great Wildebeest Migration, Serengeti National Park is Tanzania’s flagship conservation area and a must-do for first-time and returning safari goers alike.

Translated from the Maa language as, ‘The Land that Moves on Forever’, the Serengeti’s vast rolling grasslands and golden savannah give travelers a soul-stirring sense of space and support millions of wildebeest, as well as sizable populations of zebra, buffalo, elephant and giraffe and myriad gazelle and antelope species. And where there are plains game aplenty, predators – like lions, leopards, cheetahs, hyena and wild dogs – are sure to follow. The Serengeti is definitely a photographer’s paradise!