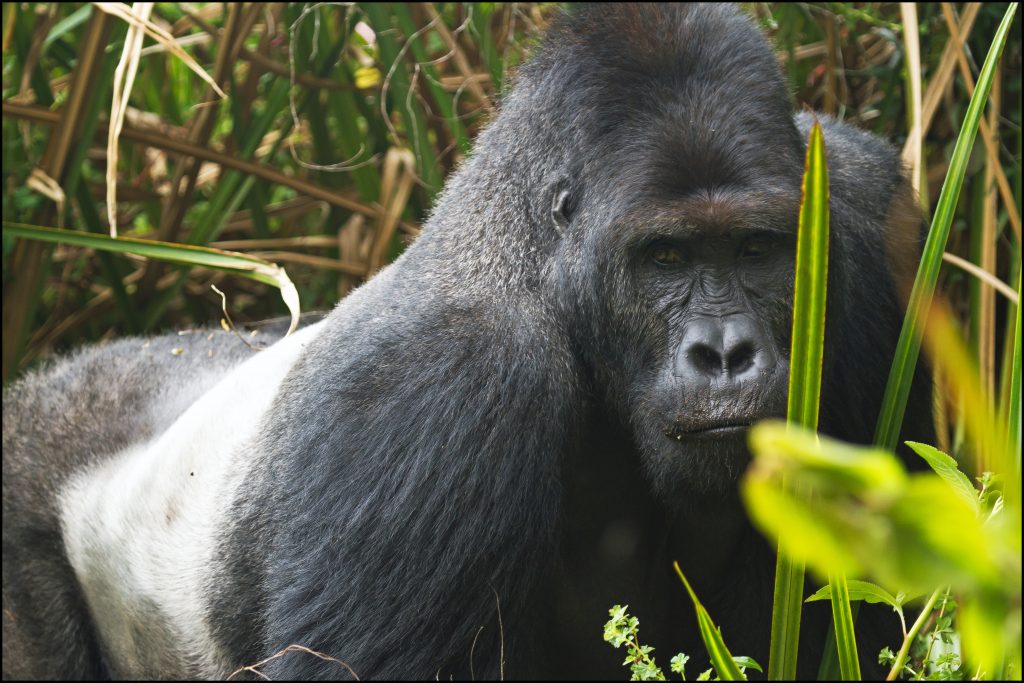 Virunga National Park (covering an area of 790,000 ha) comprises an outstanding diversity of habitats, ranging from swamps and steppes to the snowfields of Rwenzori at an altitude of over 5,000 m, and from lava plains to the savannah on the slopes of volcanoes.

Mountain gorillas are found in the park, some 20,000 hippopotamuses live in the rivers and birds from Siberia spend the winter there. Virunga National Park is unique with its active chain of volcanoes and rich diversity of habitats that surpass those of any other African park. Its range contains an amalgamation of steppes, savannah and plains, marshlands, low altitude and afro – montane forest belts to unique afro – alpine vegetation and permanent glaciers and snow on Mounts Rwenzori whose peaks culminate in 5000 m height. The property includes the spectacular massifs of Rwenzori and Virunga Mountains containing the two most active volcanoes of Africa. The wide diversity of habitats produces exceptional biodiversity, notably endemic species and rare and globally threatened species such as the mountain gorillas that offers gorilla safaris in Africa.

Virunga National Park is located in the centre of the Albertine Rift, of the Great Rift Valley. In the southern part of the Park, tectonic activity due to the extension of the earth’s crust in this region has caused the emergence of the Virunga massif, comprising eight volcanoes, seven of which are located, totally or partially, in the Park.  Among them, are the two most active volcanoes of Africa – Nyamuragira and nearby Nyiragongo – which between them are responsible for two-fifths of the historic volcanic eruptions on the African continent and which are characterized by the extreme fluidity of the alkaline lava.

The activity of Nyiragongo is of world importance as a witness to volcanic of a lava lake: the bottom of its crater is in fact filled by a lake of quasi permanent lava that empties periodically with catastrophic consequences for the local communities. The northern sector of the Park includes about 20% of the massif of mounts Rwenzori – the largest glacial region of Africa and the only true alpine mountain chain of the continent. It borders the Rwenzori Mountains National Park of Uganda, inscribed as World Heritage, with which it shares the ‘Pic Marguerite’, third highest summit of Africa (5,109 m).

The Park offers 218 mammal species, 706 bird species, 109 reptile species and 78 amphibian species. It also serves as refuge to 22 primate species of which three are the great ape – mountain gorilla (Gorilla beringei beringei), the eastern plain gorilla (Gorilla beringei graueri) and the eastern chimpanzee (Pan troglodytes schweinfurthi), with a third of the world population of mountain gorillas.

The savannah zones of the Park contain a diverse population of ungulates and the density of biomass of wildlife is one of the highest on the earth Planet (27.6 ton/km2). Among the ungulates, there are certain rare animals such as the okapi (Okapi johnstoni), endemic to the Democratic Republic of the Congo, and the red forest duiker (Cephalophus rubidus), and endemic to mounts Rwenzori. The Park also comprises important tropical zones essential for the wintering of Palearctic avifauna.

Kahuzi Biega was established in 1939 and by 1989 was recognized as a UNESCO World Heritage Site. This park is home a number of eastern lowland gorillas hence remain last stronghold with such species. This area is the 2nd most important tourism site in terms of specific diversity and endemic species in the region. The park is enormous covering an area of 6,000sqkm; it is covered with rolling hills, tropical forests with a thick jungle and two vast extinct volcanoes known as Kahuzi and Biega which is where the park derives its name.

It is located close to the Rwandan border and the Western shore of Lake Kivu. Kahuzi Biega is a well conserved national park neighbouring Bukavu town which is in the east of DR Congo. As almost everyone talks about Mountain gorillas in Bwindi, Mgahinga, Virunga and Volcanoes; Lowland Gorillas are not to miss out, they are more eye-catching and worth each of your dollars and time. The hour spent with these gentle giants is unforgettable.

Kahuzi Biega harbours over 136 species of mammals as well as around 23 primate species, also forest hogs, colobus bai, eastern chimpanzees, owl-faced monkeys, leopards the African climbing mouse of mount Kahuzi, bush buffaloes and elephants among others. According to 2003 reports, the park harbours over 349 species of birds with around 42 endemics. The park also has over 1,178 species which it conserves and protects.