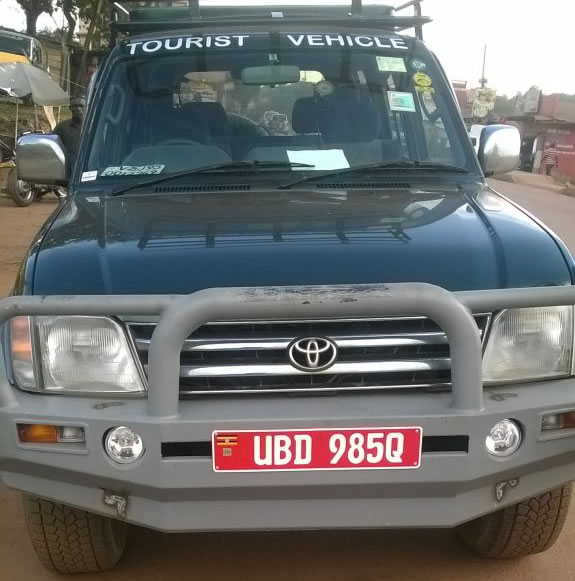 We hired a Land cruiser car which we used for our tour in Uganda however the company offers other different vehicles including Prado, super custom, safari vehicle, Coaster, Rav4, Premio plus the Land cruiser which we hired for our self drive in Uganda ‘’the pearl of Africa’’.

We booked with a 4×4 car hire Uganda when we are still in our home country. This was possible since we were talking to the tour consultant of 4×4 car hire Uganda (Konde Moses) through emails who told us what is needed for our self drive in Uganda to be a nice one as it was indeed.

We booked for our tour three weeks earlier before we went there and we paid a deposit of 40% of our scheduled price for the tour.

On our arrival to Entebbe airport in Uganda, we were picked up from the airport by a 4×4 car hire Uganda’s professional and friendly guide who took us to where we found our vehicle which we used.

We then took the photos of the vehicle because you have to do so in that if you bring it back when it is not in its fine condition you have to pay for the damages which you will have caused on it. Since we drove carefully and took good responsibilities on our hired Land cruiser vehicle, we returned back from our tour without any damage on the vehicle.

In Bwindi we enjoyed the tracking of gorillas because we arrived earlier in the Park and we were able to get involved in the morning gorilla shift.

We found out that gorilla tracking in Bwindi is done in four sectors; Nkuringo, Buhoma, Rushaga and Ruhija though our gorilla tracking took place from Buhoma sector and we enjoyed viewing gorillas from this sector.

Using our hired Land cruiser, we also visited Queen Elizabeth national park where we got surprised at seeing the tree climbing lions. We really enjoyed how these lions were climbing the branches of different tree species.

In the Park we also viewed a brilliant and beautiful Kazinga channel which is situated in the middle of the Park and here we were able to see various animals such as elephants, buffaloes, leopards plus the permanent residents which include hippos, crocodiles and aquatic birds.

We went over with our self driving to Kibale Forest National Park where we were able to see a large number of chimpanzees. Our chimpanzee tracking began at 08:00am and we were 6 individuals per group which is recommended in the Park.

We experienced how friendly these primates are to humans because on seeing us, they were eager at coming closer to us though it is not allowed in the Park since chimpanzees can catch human diseases like flu and cholera and the fact that they are wild animals though they are habituated.

We performed many activities from here including nature walking, chimpanzee tracking and bird watching because the Park protects over 350 bird species. We were also able to do game drives in every Park that we visited because we had our private car.

The Park is made of the two seasonal Rivers which include Narus River and Kidepo River which makes it photogenic. Other things which make the Park very photogenic are the Narus valley, Morungole Mountain, its sandy soils plus the big number of bird species which ranges about 500 species.

After our self driving tour which took us 10 days, we then returned to Kampala (Entebbe airport) for a flight back to our home country and we were escorted by the 4×4 car hire Uganda’s professional and friendly guide.

We discovered and enjoyed various cultures in each Park we visited due to the different tribes of People who live in those Parks and we were able to enjoy their dressing codes, dances, songs and cultures.

We really enjoyed our self drive tour in Uganda using a 4×4 car hire Uganda because the company offers good cars which are in the good condition and ready for various activities in the Parks most especially the game drives whereby through this activity, we were able to at least view the most remarkable things in Uganda’s national parks.

We were able to clarify why Uganda is called the ‘’Pearl of Africa’’ after using a 4×4 car hire for our tour and after, we returned back home safely with a great experience in Uganda.